Bluebell with a view 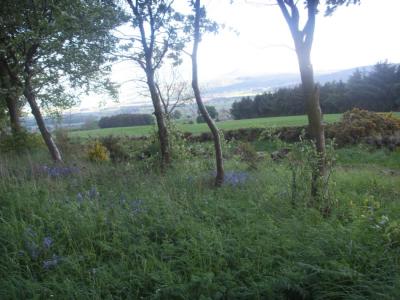 Bluebells with a view

This photograph was taken from the edge of Pitmedden forest just above the village of Auchtermuchty, in the northern part of the Kingdom of Fife. You pass Auchtermuchty if you are travelling from the motorway to St Andrews.

There are some lovely walks in the Forest, as well as great views, and through the trees you can just make out East Lomond hill which is the picture-postcard backdrop for the ancient and delightful village of Falkland (with its fabulous and famous royal Palace, the ancient Hunting Lodge of the Stewart Kings and Queen).

Sloping down to the left is the Eden Valley, bordered by Auchtermuchty. Yes, it really is referred to as the 'Eden Valley' as the River Eden runs through this fertile land watering it to make it 'rich' ground for the local farmers. How it compares with the 'Garden of Eden' in the Bible I couldn't say.

Auchtermuchty is the place where the famous band leader Jimmy Shand lived and the Scottish singing twin brothers, The Proclaimers hail from.

In the foreground of this picture you can see Bluebells, Scotland's national flower. The hills around Pitmedden Forest are covered in them in early summer - it is a sight to behold, and this picture does not do them justice.