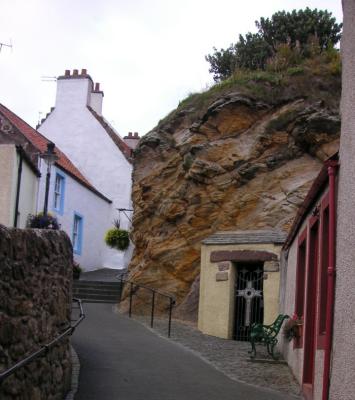 From this cave comes the name Pittenweem - The name is Pictish 'Pit' meaning place and 'weem' is cave - so Pittenweem is the place of the cave.

St Fillan was an early Christian missionary from Ireland.

He lived in the 7th century and is said to have written his sermons in this dark cave by the light of his luminous left arm.

The common belief that St Fillan lived in this cave permanently is probably not true. He was a missionary and most likely led a peripatetic life, from one community to another, staying wherever there was shelter. He most likely used the cave, as it is an ideal cover for an occasional visit in his ministry.

The cave has had an interesting history including being used by smugglers!

Many folk visit Pittenweem for the art and especially the famous Art Festival in August each year (or the famous fish and chips from here or the next village at Anstruther).

But if you're in the area, a visit to this cave would take you into a bit of history.