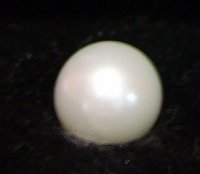 Your beautiful country is famous for its natural pearls and I was thrilled to see the most famous one called the Abernathy Pearl in Perth not long ago.

"Little Willie" as it is affectionately called, was found in the River Tay, which is a very swiftly moving river. The swift water movement is one theory as to why this river has been the home to so many lovely pearls, as the water will stir up particles which in turn get caught in the mussels, which coat them with nacre, making a pearl.

John Lochtie, of Cairncross Jewelers, Perth, (only blocks away from the River Tay) is in the middle of constructing a natural pearl necklace, which, he says, he'll never be able to finish. Laws now protect the mussels in Scotland, so legally, no more pearls may be harvested from its waters.

All the pearls he sells now were harvested legally before the current laws were in place. He makes lovely pins and brooches from the natural pearls, often weaving a story into the piece.

Not everyone, even in the UK, is aware of Scotland's fame for pearls. One of my website visitors was having a hard time having her natural Scottish pearl bracelet appraised in England, because the jeweler said, "I've never heard of Scottish pearls." Pity....he's so close, he could go and see "Little Willie" for himself if he wanted.