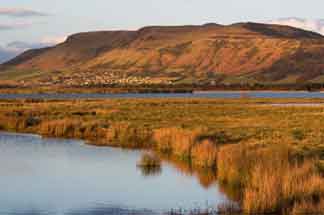 Beautiful Loch Leven, near by Kinross
For a good day's fishing the angler is seldom at a loss,
For the Loch it abounds with pike and trout,
Which can be had for the catching without any doubt;
And the scenery around it is most beautiful to be seen,
Especially the Castle, wherein was imprisoned Scotland's ill-starred Queen.

Then there's the lofty Lomond Hills on the Eastern side,
And the loch is long, very deep, and wide;
Then on the Southern side there's Benarty's rugged hills,
And from the tops can be seen the village of Kinross with its spinning mills.

The big house of Kinross is very handsome to be seen,
With its beautiful grounds around it, and the lime trees so green
And 'tis a magnificent sight to see, on a fine summer afternoon,
The bees extracting honey from the leaves when in full bloom.

There the tourist can enjoy himself and while away the hours,
Underneath the lime trees shady bowers,
And listen to the humming of the busy bees,
While they are busy gathering honey from the lime trees.

Then there's the old burying ground near by Kinross,
And the dead that lie there turned into dusty dross,
And the gravestones are all in a state of decay,
And the old wall around it is mouldering away.