We booked a table for 10 for 6:30pm on 12 September 2009 at The Red Lion, Culross, Fife.
When we arrived we were given 2 tables, 1 for 6 the other for 4. When we enquired about 1 table for 10 we were told that none was available. At approximately 8:30pm we were asked to leave the table for 6 as they had another booking for that table.
When we made the booking we were not told that we could not have 1 table for 10 and that we had to vacate 1 of the tables by 8:30.
As for the rest of the short evening:
a. Cutlery for the first course was put at the end of the table, not placed at the place mats.
b. No cutlery was provided for the second course, we had to get it ourselves.
c. No aprons were provided for the “sizzling steaks” as stated on the menu.
d. Quite a bit of the meals had obviously been done in a microwave.
We had all been there before and, whilst we had experienced a and c above, the others had been quite happy with the restaurant.
A restaurant that once had a good reputation that is now resting on its laurels and will lose customers very quickly if this attitude remains.
Needless to say none of our party will be visiting again. 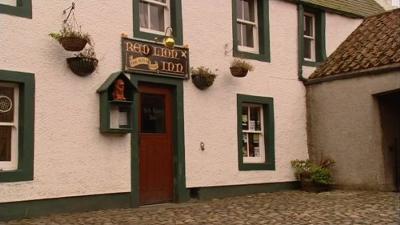 This little 'pub' is in the heart of the historic village of Culross. It captures the atmosphere of a country pub with its old fashioned decor, which is in-keeping with the spirit of of the old village. Car Parking is to the rear and ample enough.

On entering, you sense of being in a place that cares about you and your visit. The staff are by and large friendly and attentive.

The menu is very 'pubby' but interesting. There are 'Specials' on a chalkboard. The Red Lion has real Ale!

I ordered the Haddock, chips and peas - which is their speciality and comes on a large fish shaped plate and is ample in size. The peas were tinned and I was not offered Mushy as an alternative. The fish was soggy in parts but overall ok.

My dining companions had Breast of Chicken in cream in mushroom sauce with lots of fresh veg and new pots. They enjoyed it very much.

We all ate a sweet which ranged from the traditional stodgy puds to chocolate ice cream. All were adequate.

Mostly the experience was good and I would return but probably not have fish and chips again! Both my companions and I would be happy to recommend this little pub as a place to try, but don't expect too much and you will be more than happy.

Visited on 08/10/2009.
I was part of a pre-booked party of 13 but on arrival we were split into 3 tables of 3/4/6 which wasn't the best for a social get-together.
The drinks and food orders were taken and then we were informed that 6 of the party would have t re-order as the kitchen had no more steak!(this was at 7pm on a Thursday evening).
Although the staff removed empty glasses they didn't think to offer re-fills. just as I thought it couldn't get any worse the smoke alarms throughout the dining area started wailing loudly.Staff managed to stop them for 5 minutes and then they went off again.
To cap a very odd experience, half the sweets were cancelled as the kitchen had no butterscotch sauce for the sticky toffee pudding (not rocket science to whip some up!!)
Overall it was very disappointing as I had heard great reviews re the service and the steaks..won't hurry back!!